Two Buchanan County residents have been honored by the Iowa Pork Producers Association.

Ben Reck of Winthrop is among eight farmers in the state named to the 2019 class of Master Pork Producers. Reck, a member of the Buchanan County Pork Producers, lives on the farm that’s been in his family for generations. For Reck, animal care and raising awareness about where food comes from is important. After constructing a pig building, he offered an open house to the community.

And Matt Zitelman, a Pipestone Systems manager near Winthrop, was named as one of three Master Pork Partners. Zitelman, who has been raising swine for more than 18 years, started at the caretaker level and quickly worked his way up to manage a breed-to-wean sow operation for the past nine years. The IPPA says Zitelman puts exceptional effort into cross-training, mentoring and developing his team of employees – and he believes community involvement contributes to the industry’s success. He’s been part of the Buchanan County Pork Producers for the past four years – grilling at various events and encouraging his team to volunteer too.

Zitelman and Reck were both honored with their awards during the Iowa Pork Congress earlier this month in Des Moines. 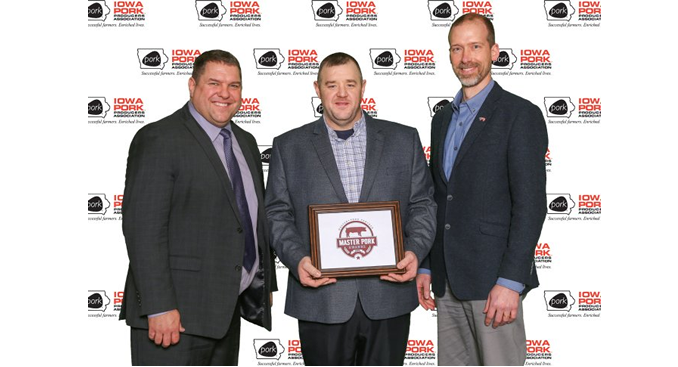