The new Delaware County Jail and Sheriff’s Office opened to the public for tours this past Friday and Saturday.

The new facility on the far west end of Manchester replaces the current jail and Sheriff’s Office that sits next to the county courthouse. The current facility was built in 1967 and its aging features and small space with only 12 beds wasn’t fitting the county’s needs – or the state’s requirements – any longer. County Supervisor Jeff Madlom:

Voters approved the $5.9 million bond for the new jail in May 2019 and plans started rolling. The location for the new jail and Sheriff’s Office on West Howard Street was chosen from half a dozen sites, with the County purchasing the land from Gary Vontage. Construction on the facility began last spring, with the project running about $600,000 to $700,000 over budget.

The new jail with over 40 beds now meets state requirements, with both maximum and minimum security cells. The inmates Delaware County didn’t have room for will now be returning to the county, with the possibility of Delaware County taking inmates from other counties now as well. Madlom says the new facility also features a kitchen to prepare the inmates’ meals, secure and temperature-controlled space for items collected as evidence, secure entrances and a bulletproof window in the front lobby. There’s also more room for the Sheriff’s Office to do their work, as well as a tornado safe room where emergency management can meet for weather emergencies and the DCI can meet for investigations. He says the bottom line is it’s functional – but not fancy.

Staff and inmates were originally expected to move in starting this week, but Madlom now says that’s up in the air.

And once the new jail facility is ready to go and the County figures out their situation with the old Community Savings Bank property, Madlom says they’ll begin to turn to their attention on what to with the old jail building. 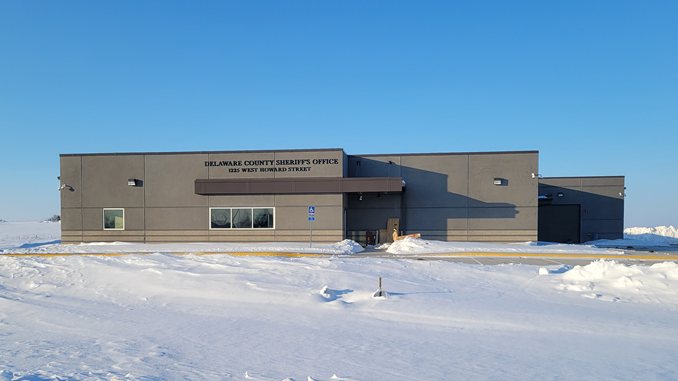