Today is a bittersweet day for the Manchester community as demolition begins on a historic building.

Demolition started Monday morning on what many people in the community call “the old funeral home”, the large pink building that sits at the intersection of North Franklin and West Union Street in Manchester. Years ago, the building was home to Civil War veteran and Senator Rodney W. Tirrill, with the nearby park named in his honor. City Manager Tim Vick says in recent years, the building’s condition deteriorated and it was labeled a nuisance – and while the City and a couple other groups had hoped to save it through a renovation, it would have cost too much money.

Vick says once the building is demolished, it will become green space and a new entrance to Tirrill Park.

As crews began demolishing the building Monday morning, there were a few people camped out sitting on their lawn chairs watching the action. Vick says that will be a busy zone for crews, so if you’re passing through the North Franklin/West Union Street area over the next couple days, just keep an eye on traffic.

Most of the building was demolished by Monday afternoon, but Vick says all of the demo work will probably take a couple days. 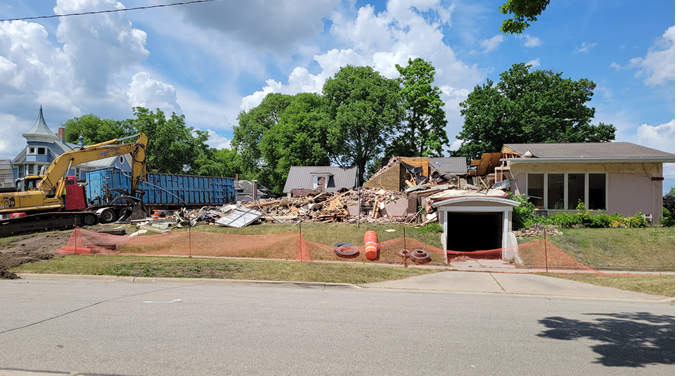