A west central Iowa town has a new tourist attraction: the 2021 Iowa’s Best Breaded Pork Tenderloin.
Victoria Station in Harlan has won the 19th annual contest, presented by the Iowa Pork Producers Association (IPPA) and managed by its restaurant and foodservice committee.
“That’s pretty good for a prime rib joint,” joked Richard Buman, who bought the restaurant 18 months ago with his wife, Angela.
When the couple took over Victoria Station, they “inherited” a tenderloin being served at the time. And while there was “nothing wrong it,” Richard Buman said, they decided to make the sandwich their own.
Each hand-cut, 8-ounce loin is tenderized three times, then coated in a blend of dry seasonings and marinated for at least an hour. The meat is dipped in a buttermilk breading and fried to order.
Sandwiches are served with lettuce, tomato, onion, and pickles. The Bumans recommend eating the tenderloin with their house-made garlic aioli and Texas toast, though the traditional mustard and burger bun are available.
“For the aioli, we use the garlic that we roast ourselves for the prime rib,” Richard Buman said. “In my opinion, that really makes the sandwich stand out.”
Tenderloins can also be ordered “buffalo style,” tossed in a cayenne pepper sauce.
In the week after being named among this year’s five finalists, Victoria Station sold what would normally be nearly two months’ worth of tenderloins. The Bumans plan to hire an extra daytime server as customers come from all over—one couple heading home to Atlanta detoured an hour and a half to try a tenderloin.
“We have called it the tenderloin tsunami,” said Kelsey Sutter, IPPA’s marketing and programs director, who noted that past winners have reported selling five to 10 times more tenderloins in the first month, and double their normal number still a year later. “This contest has a huge following, and it’s always fun to see how many people are willing to make a road trip to explore our top homemade tenderloins.”
Prior to purchasing the restaurant, the Bumans held various positions at Hy-Vee in Le Mars. Richard grew up in Harlan, and he and Angela were high-schoolers when they had their first date at Victoria Station. They’re self-proclaimed “foodies” and had long talked about owning a small restaurant.
“We simply love great food and love entertaining, so this is a way we can do it and hopefully make a living at it,” Richard Buman said.
The IPPA restaurant and foodservice committee is officially presenting the best tenderloin award today (Friday, Oct. 15) at the restaurant. Victoria Station will receive $500, a plaque, and a large banner to display.
This year’s runner-up is a past contest winner. Larsen’s Pub in Elk Horn, which holds the 2007 title, again earned high ratings from a panel of judges, and will receive $250 and a plaque from IPPA. Rounding out the top five finalists (in no order) are Old Road Cafe & Bar in Emerson; Z’s Eatery and Draught Haus in Indianola; and Stalker’s Pub in Miles. These restaurants will receive a top five plaque to display.
IPPA received 5,928 nominations for 526 different establishments during a spring nomination period. The restaurant and foodservice committee reviewed the top 40 restaurants in the summer. Each was scored on the quality of the pork, taste, physical characteristics, and eating experience.
The tenderloin contest recognizes Iowa dining establishments that offer a hand-breaded or battered pork tenderloin as a regular menu item. To win, businesses must be open year-round.
The winners are announced as part of #Porktober21, or October Pork Month, which celebrates the state’s dedicated pig farmers and the great product they produce.
PrairieMoon On Main in Prairieburg, about 30 miles northeast of Cedar Rapids, won the 2020 contest. See the full list of past winners.
If You Go
Victoria Station is located at 407 Victoria St. in Harlan. Hours are 11 a.m. to 9 p.m. Tuesday through Thursday; 11 a.m. to 10 p.m. Friday and Saturday; and 4 to 9 p.m. Sunday. The restaurant is closed Monday. Dine in or carry out. Approximate seating capacity is 86 inside, and 24 outside. Call (712) 755–5682 or visit www.victoriastation.net. 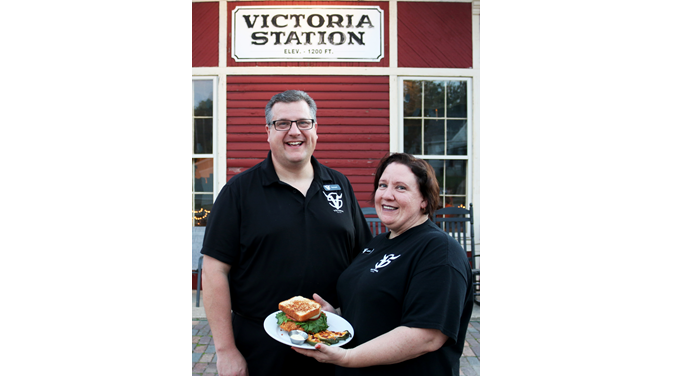