Congresswoman Ashley Hinson was in Manchester on Wednesday morning to meet with the Delaware County Suicide Prevention Coalition.

The Coalition was formed earlier this year by Heartland Youth for Christ Area Director Jessica Pape and Keystone AEA and West Delaware School Social Worker Stefanie Dingbaum. Their vision is to create a healthier community by eliminating suicides and connecting community members – especially teens – to the services available to them.

During the Delaware County Suicide Prevention Coalition’s meeting with Congresswoman Hinson, Pape says they talked about the issues in the Manchester community and the need for more accessible services, the statewide lack of services and beds and the strain it’s putting on law enforcement, schools, hospitals and teens in general. Pape says it’s a complicated issue that they know there isn’t an easy fix for – however, she says there are also great things happening, like the conversations about stigma and having a coalition of people who are passionate about preventing suicide all in one room together looking at how they can better collaborate.

Congresswoman Hinson says the conversation was informative and impactful – adding that she’s incredibly grateful for and extremely impressed by the work the Coalition is putting in every day to improve access to mental health resources and remove the stigma around these issues. Hinson says she’ll continue working to ensure Iowans know there are resources and people there for them.

The Delaware County Suicide Prevention Coalition held free trainings in October for the general public to learn how to respond if someone comes to you with thoughts of suicide. Pape says about 75 community members attended the trainings.

The Coalition is open to anyone. If you’d like to learn more, you can email Jessica Pape at jessica@heartlandyfc.org. 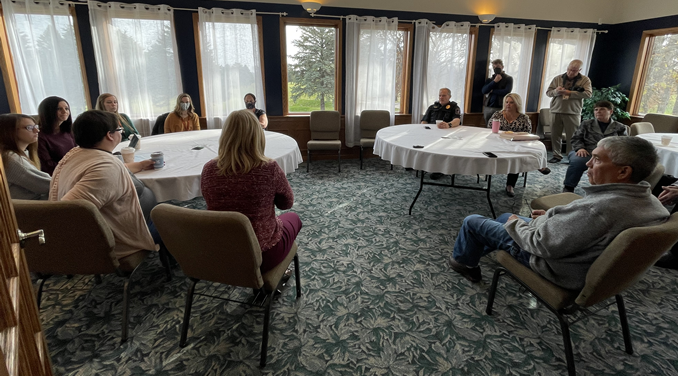