A carbon capture pipeline could be coming through Delaware and Linn counties – and on Monday afternoon, landowners impacted the proposed project made their voices heard at an informational meeting in Manchester.

The Iowa Utilities Board hosted the meeting along with Navigator Heartland Greenway LLC – the company proposing the project. Elizabeth Burns-Thompson, Vice President of Government and Public Affairs with Navigator CO2 says 36 meetings are being held across the state – the first step in the process to learn what the project is all about.

Navigator’s pipeline system would capture carbon dioxide at multiple ethanol plants, convert it to liquid form, and transfer the liquefied carbon dioxide to a permanent underground sequestration site in Illinois.

The main pipeline cuts across Iowa from the northwest to the southeast corners – but it branches off in several areas, including through southern and eastern portions of Linn County and southeastern Delaware County – reaching up to the ethanol plant on the west edge of Dyersville. Navigator Heartland Greenway says the pipe, measuring between 6 and 24 inches, will be installed at least five feet below the ground – deeper in many places. It’s expected to last for decades.

Landowners directly impacted or within a half mile of the proposed project were notified of the plans by mail in recent weeks. Over a hundred people attended Monday’s two-hour long informational meeting in Manchester – and many took the opportunity to ask questions and share their opinions.

Delaware County Supervisor Shirley Helmrichs says she has concerns about the carbon capture pipeline, especially after seeing some of these landowners burned by similar projects before.

Burns-Thompson says she understands the concerns.

If landowners object to the project, they do not have to sign easement agreements and they can file an objection with the Iowa Utilities Board.

Another public informational meeting will be held – virtually – in January. If Navigator Heartland Greenway’s permit is approved by the Iowa Utilities Board next year, construction is expected to get underway in early 2024, with hopes to start bringing the facilities online later that year. 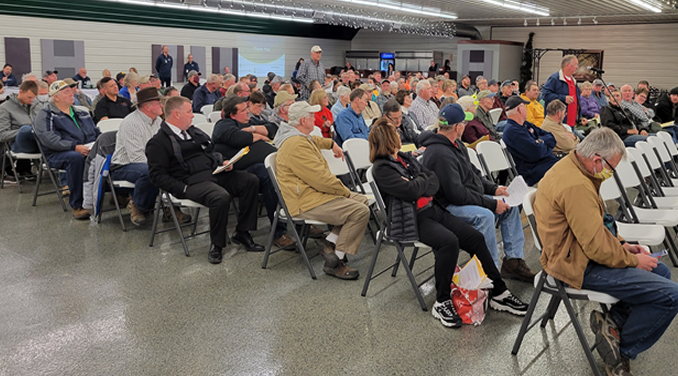