AMES, Iowa – After several years of modest gains and losses, the average value of an acre of Iowa farmland skyrocketed 29% in 2021. The nominal value of an acre of farmland is now higher than at any point since Iowa State University and Iowa State University Extension and Outreach began surveying values in 1941, and is 12% higher than the previous peak in 2013; although the current value in inflation-adjusted terms is still lower than that for 2012 and 2013.

The last time farmland values increased more than 25% was in 2011, when values rose 32.5%. “Surging ethanol demand and high commodity prices were two of the significant factors driving the increase in 2011,” said Wendong Zhang, an associate professor in economics and extension economist at Iowa State’s Center for Agricultural and Rural Development. “The increase this year is in part due to much stronger commodity prices thanks to higher exports, stronger than expected crop yields, and strong ad hoc COVID-19 related government payments.”

Zhang leads Iowa State’s annual Land Value Survey, which found that the average statewide value of an acre of farmland is $9,751, an increase of 29%, or $2,193, since 2020. The $9,751 per acre estimate, and 29% increase in value, represents a statewide average of low-, medium- and high-quality farmland.

Zhang said that favorable interest rates also contributed to the increases in 2011 and this year; however, he noted that inflation was a very important factor behind the value increase this year as well. Last week, the U.S. Bureau of Labor Statistics reported that the nation’s inflation rate rose 6.8% over the last year, which was the largest increase since 1982.

“Inflation is driving some investors to consider farmland as an alternative investment asset because farmland value tends to rise with higher inflation. The inflation-adjusted average value rose 21% but the nominal value rose 29%, which shows the effect of inflation,” Zhang said.

As for U.S. net farm income, Zhang said it is forecasted to grow $22.0 billion (23.2%) from 2020 levels to $116.8 billion in 2021, which is the highest level since 2013. “The increase in 2021 farm income is largely driven by the rises in commodity prices and the resulting crop and livestock receipts, as opposed to almost solely ad hoc federal government payments as in 2020,” he said.

After the large increase in 2011, farmland prices jumped another 23.7% in 2012, though Zhang said that while 80% of respondents had optimistic views about what the farmland market would look like one year from now, most reported that they expect values to increase less than 10% in 2022.

The South Central district reported the lowest values, $6,035 per acre, and the lowest dollar change, $1,377 per acre, while the Southeast district saw the smallest percentage increase, 21.9%.

Land values were determined by the 2021 Iowa State University Land Value Survey, conducted in November by the Center for Agricultural and Rural Development at Iowa State and ISU Extension and Outreach. Results from the survey are consistent with results by the Federal Reserve Bank of Chicago, the Realtors Land Institute and the U.S. Department of Agriculture.

The Iowa State Land Value Survey is based on reports by agricultural professionals knowledgeable of land market conditions, such as appraisers, farm managers, agricultural lenders and actual land sales, and is intended to provide information on general land value trends, geographical land price relationships and factors influencing the Iowa land market. The 2021 survey is based on 645 usable responses from 455 agricultural professionals. Seventy-five percent of the 455 respondents answered the survey online.

The Iowa State Land Value Survey was initiated in 1941, the first in the nation, and is sponsored annually by Iowa State. The survey is typically conducted every November and the results are released mid-December. Only the state average and the district averages are based directly on the Iowa State survey data. County estimates are derived using a procedure that combines the Iowa State survey results with data from the U.S. Census of Agriculture.

CARD offers a web portal that includes visualization tools, such as charts and interactive county maps, allowing users to examine land value trends over time at the county, district, and state level. 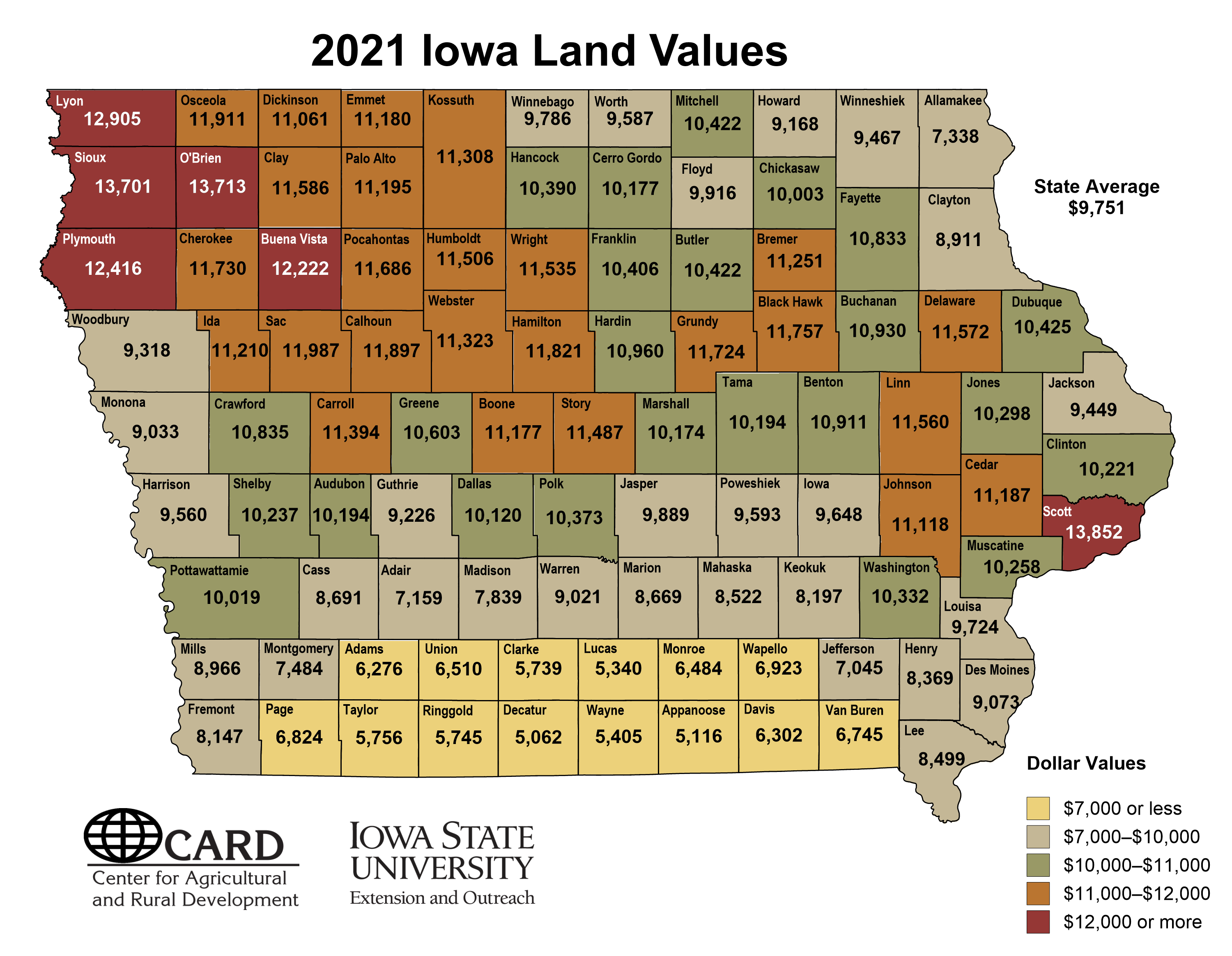