The Fayette County Sheriff’s Office says a deputy drove up on a two-vehicle accident on Highway 187 about a mile south of Arlington shortly before 8 am and discovered the crash involved a school bus and a car.

The Sheriff’s Office says the school bus had slowed down due to a vehicle that was broken down on the side of the road when it was rear-ended by a car. Authorities say the car’s 16-year old driver did not see the bus slowing down due to the sun.

The car was totaled.

The school bus, driven by 68-year old Janaan German of Lamont, was transporting over forty students to school at the time of the crash. They were transferred to a different bus and then transported back to Starmont, where they were all evaluated for injuries by medical staff.

Starmont Superintendent Gary Benda tells KMCH that three students – one on the bus and two in the car – suffered minor injuries, including a fractured hand, bruises from air bags and whiplash symptoms.

The Arlington Fire Department and Arlington Ambulance assisted the Sheriff’s Office at the scene.

The accident remains under investigation. 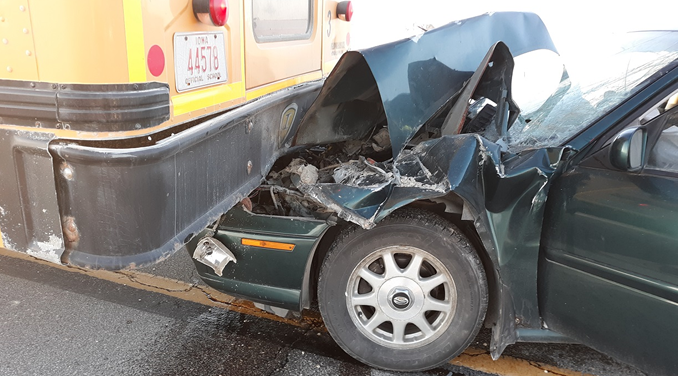