A Clayton County bar was destroyed in a fire Tuesday night.

Firefighters were called to Bootleggers River Tavern in Millville at 36835 Noble Road shortly after 6:30 pm for a report of smoke and possible fire inside the two-story building.

The top floor of the building is used as a home, while the bottom floor houses the business.

All people and pets were evacuated from the upstairs residence before the fire department arrived. The business was not currently open at the time.

Several area fire departments and agencies responded to help at the scene.The Guttenberg Fire Department says when the first fire personnel arrived, they were advised that the smoke and fire was coming from inside the downstairs business.

The building quickly became fully engulfed in fire. A large water shuttle system was set up and the fire was brought under control around 10 pm. The fire department returned Wednesday morning to extinguish some hot spots that had flared up.

The entire structure is a total loss. The Red Cross has been contacted to help the family who lived upstairs. The cause of the fire has not been determined and remains under investigation.

Amy Knockel, whose family manages Bootleggers, tells KMCH they’re not sure yet if they’ll rebuild. 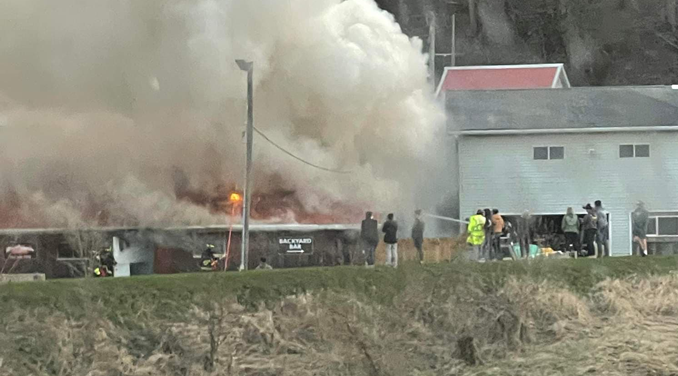