“It’s hard to tell where we’ll be a year from now, but we haven’t seen any weakness anywhere in this market,” says Hensley. “It’s a strong market across the U.S., not just in the Midwest.”

But the price trends for Midwest farmland are particularly glaring. In parts of Iowa, southern Minnesota and eastern Nebraska, Hensley has seen some 30% and 40% year-over-year moves in the land market. As a result, frustrations have been palpable among would-be buyers at land auctions.

“When things are moving that quickly, people were coming to sales thinking they came with a big enough pocketful of money to get something bought but weren’t able to get it done the way they thought they would,” he says.

How Can Farmers Pay The Cost?

Farmers continue to snap up land that was $9,000 an acre six months ago that has gone to $13,000 an acre and, in some cases, even doubled in price. 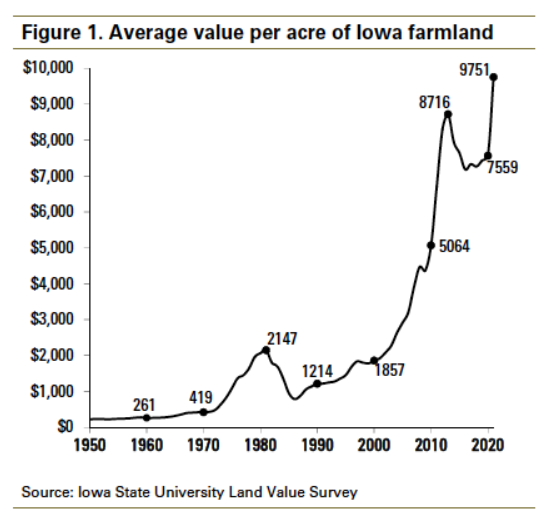 But even with $7 corn prices and $16 soybeans, those acres won’t necessarily cash flow. That has many growers and others in the ag industry wondering why and how farmers are able to pay such huge prices for ground.

The answer: those farmers have what Hensley calls dry powder. They have built up equity from ground they own, they leverage it to pull the trigger and buy additional ground.

He Who Has The Gold Makes The Rules

“When you have some built-up wealth in a community, when a farm comes available, the same half dozen guys that have been driving past that same piece of ground for the past 50 to 60 years have the capability to compete,” he explains. “And that competition has really played itself out in a pretty special way over recent months.”

The 2017 Iowa Farmland Ownership and Tenure survey confirms his theory. The survey, which is conducted every five years, showed that more than 80 percent of Iowa’s farmland is owned debt-free. Those farmers who have equity built up in 2,000 acres or more over many years have more available dollars to spend and, as a result, increased purchasing power.

“They’re taking excess profits from other land and building their business – that’s what’s happening here,” Hensley says. “It’s been a bit of a perfect storm the past 12 to 18 months.”

So Much Uncertainty Ahead

The question now is with higher interest rates coming into play, will that cool the market or accelerate farmers’ sense of urgency?

“We’re booking sales right now into June and July, and that is playing into some people’s thinking,” he notes.

Long-term, the selling and buying are likely to cool due to mortgage rates. Some are now by 2% to 3%, depending on the loan product.

“Right now, it’s my belief that the strength in the positives that have come from $7 and $8 corn and $15, $16 soybeans has offset the potential negative influence of higher rates, because people are still using a lot of cash,” Hensley says. “But once that cash position changes, that’s really when interest rates will start to have an influence on the market in a more defined way.” 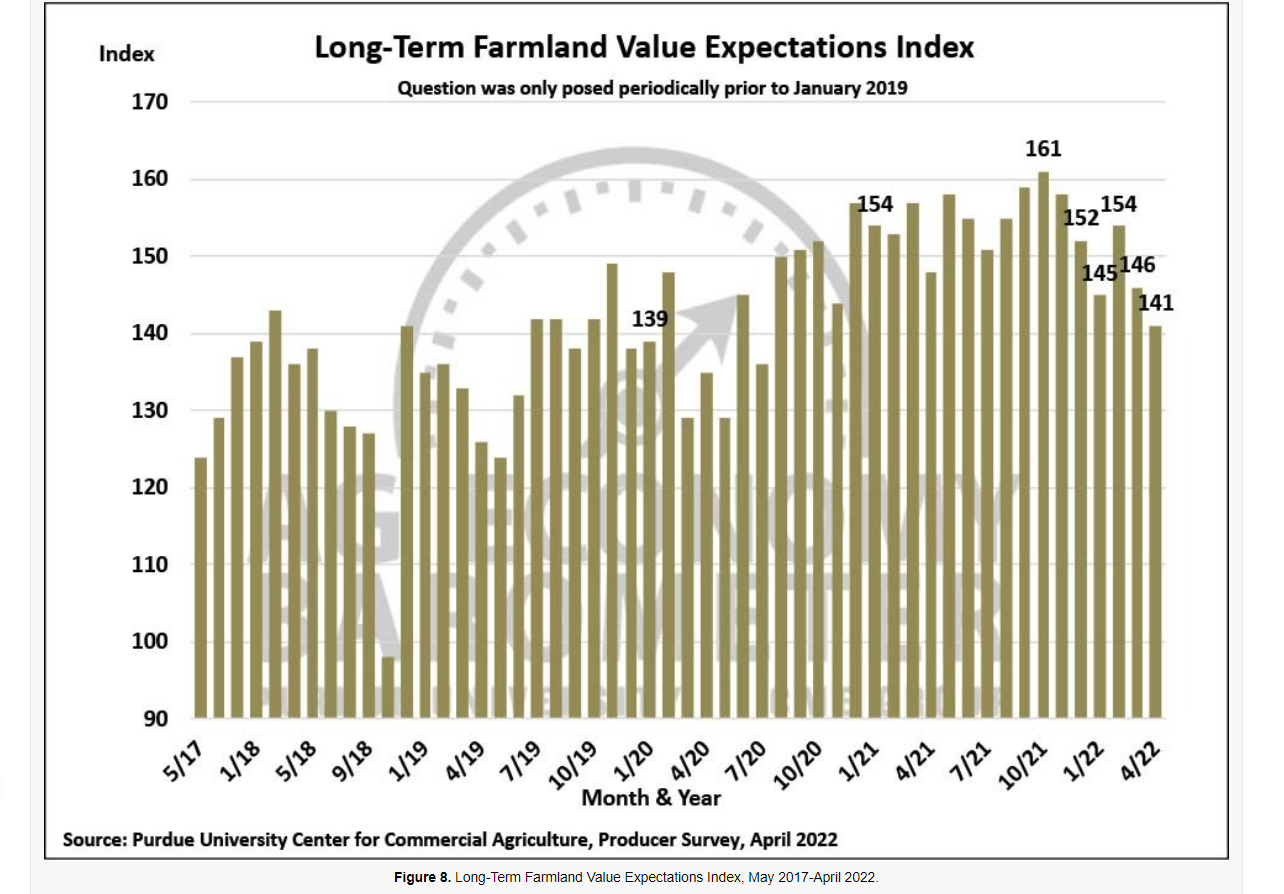 In fact, farmers’ expectations for continued increases in farmland values appear to have peaked last fall, according to The Purdue/CME Group Ag Economy Barometer conducted in April and reported May 3, 2022.

“Responses to the 12-month ahead farmland value question since last fall reveal a shift among producers from expecting values to increase towards expecting farmland values to remain about the same,” notes the report, authored by James Mintert and Michael Langemeier, Purdue Center for Commercial Agriculture.

The barometer sentiment is calculated each month from 400 U.S. agricultural producers’ responses to a telephone survey. The most recent survey was conducted from April 18-22.

Current Sales Cycle Is About To End

Hensley says there is a natural break in land sales that occurs each spring when planting season gets underway. A new cycle then begins post-planting.

However, he makes no promises on that possibility.

“If the situation in Ukraine changes, that could change the market in a lot of ways,” he says. “Every month, new information comes in and influences the market, and we’ll see what happens this summer.”

ADVERTISEMENT
Guest of the Day