Severe weather moved into eastern Iowa for the second night in a row on Tuesday night.

A tornado was reported east of Winthrop around 9 pm (pictured). Buchanan County Emergency Management Coordinator Rick Wulfekuhle tells KMCH it was spotted along D-22 at Racine Avenue and stayed in a rural area. The Winthrop Fire Department reported a few minutes later that the tornado had lifted. No injuries have been reported at this time.

Wulfekuhle says they’ll take a more extensive look at the area at daybreak on Wednesday.

Prior to the tornado touching down near Winthrop, trained spotters reported funnel clouds near Littleton and Independence. Winds estimated at 70 miles per hour also moved through Buchanan County, leading to downed power lines and tree limbs. Wulfekuhle says crews were out cleaning up in Independence late Wednesday night. No word yet on whether the Buchanan County Fairgrounds sustained any storm damage as the 2022 fair kicked off on Tuesday.

Heavy rain also fell in northern Fayette and Clayton counties, with reports of two and a half to four inches by 8:30 pm Tuesday. Flash flooding was reported in the McGregor area.

The storms were part of a complex that moved across the Midwest on Tuesday, turning into a derecho in South Dakota and western and northern Iowa with winds up to 90-plus miles per hour. The storms started to weaken as they moved into eastern Iowa Tuesday night.

Storm chances remain in the forecast through Friday. 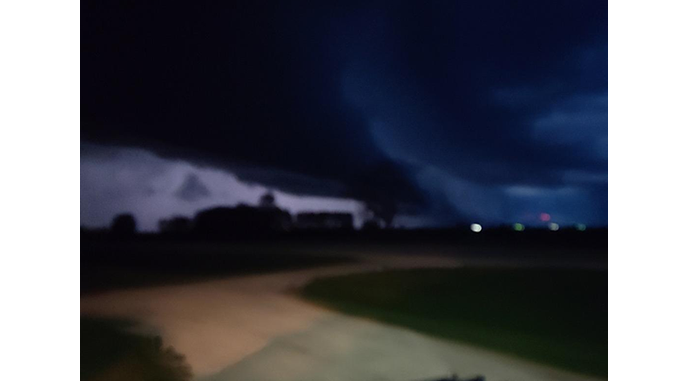