Harvest progress is up, but river levels are down. South of St. Louis, parts of the Mississippi River are so low from weeks of drought that barge traffic is being limited.

“As if agricultural shippers did not have enough supply chain challenges to occupy multiple lifetimes, there is current and growing concern related to the diminished water levels along the inland waterway system that will impact barge transportation,” says Mike Steenhoek, executive director of the Soy Transportation Coalition. “This will become more acute as we increasingly enter harvest season.”

Since the Sept. 1, 890 grain barges have unloaded in New Orleans, according to USDA’s grain transportation report. That’s nearly 40% fewer than the five-year average.

Similarly, barge freight rates have increased steadily since early August. As of Sept. 27, the St. Louis barge rate for export grain was a record 1,250% of tariff ($49.88 per ton), 95% higher than the five-year average, and 58% higher than same period last year.

Unless barge supply improves, the increased demand for barges from grain shippers during harvest will likely put even more upward pressure on barge rates, according to USDA.

To prevent barges from running aground during their voyages, companies must lighten the load. Steenhoek says a typical barge can be loaded with 1,500 short tons of freight (50,000 bu. of soybeans, for example).

If the water level for loading is decreased by 1’, the 15-barge tow will be loaded with 75,000 fewer bushels.

“Barge tows south of St. Louis can often include 30 to 40 barges,” he says. “A reduced maximum to 25 barges is therefore significant. Having to load barges lighter and restricting the number of barges results in needing more roundtrips to accommodate a given amount of volume. The expected result of this is higher barge shipping rates.”

“Unfortunately, precipitation over the next month is expected to be limited – further exacerbating the shipping challenges,” Steenhoek says. 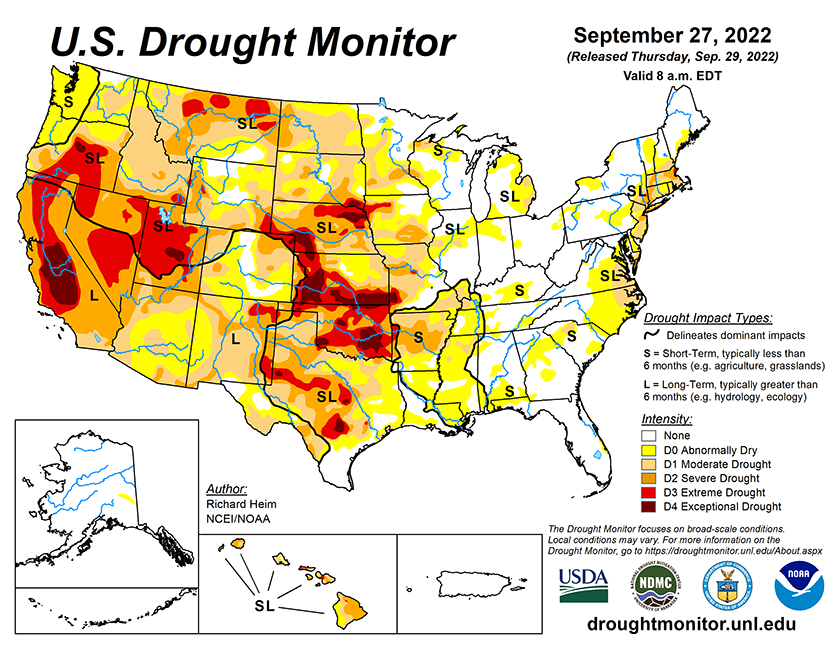