Dyersville is planning to rehab a bridge on the west edge of town.

The 1st Avenue Bridge that crosses Bear Creek near Tegeler’s Pond sees quite a bit of traffic from travelers coming into town or heading out on Old Highway 20 – over two and a half thousand vehicles every day. The concrete slab bridge built in 1974 is reaching the end of its 50-year design service life. And it has several structural deficiencies – the east approach has settled several inches and the bridge deck has spalls up to two inches deep, with some exposed reinforcing that have been filled with asphalt patches.

Currently, the bridge doesn’t have any load restrictions – but engineers say it’s hard to predict when restrictions, closures or other measures will become necessary.

A feasibility study on the bridge was recently conducted for the City, providing five options for moving forward. The options included:

On Monday night, the Dyersville City Council voted to move forward with option #3 – a full rehabilitation of the 1st Avenue Bridge at Bear Creek. A full rehab would include removing and replacing any unsound concrete from the top of the bridge deck, removing and replacing the bridge approach pavement and expansion joints, and installing new aesthetic railing (similar to photo below) to enhance the bridge’s appearance and reflect the character of the downtown.

The City says work on the project is expected to take place during the third quarter next year (mid-to-late summer into early fall) at an estimated cost of $497,000. 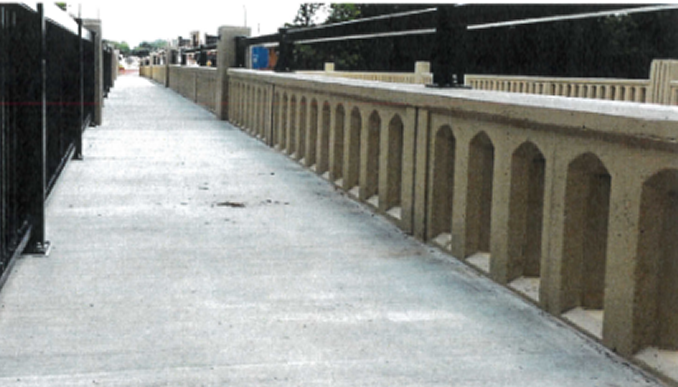