The City of Manchester is still trying to purchase land for their airport expansion – and if an agreement isn’t met with the landowners, it could come down to eminent domain.

City Manager Tim Vick says the goal is to bring the Manchester Municipal Airport up to minimum standards for general aviation airport classification – which means they need to widen and lengthen the runway and get some air space. The airport runway is currently 3,465 feet long and 50 feet wide – they’d like to go 4,000 feet long and 60 feet wide. Vick says this will allow the City to be able to handle larger planes and more traffic.

The City says the preliminary cost estimate for the project is $2.7 million, with inflation and the final design expected to impact that number. The City will be applying for FAA funding, which would be a 90/10 split (90% FAA/10% City share).

Vick says for the past three years, the City has been negotiating with several adjacent property owners to try to acquire the land needed – and that means going through two different assessments to have the property appraised.

The City used a company called Midwest Right-of-Way for the land negotiations. Two property owners have agreed to sell their land – Ruth Francois has Tract 7, which is over 14 acres on the west side of the runway and James Hill has Tract 9, which is more than four acres on the south side. The City paid Francois $270,000 for approximately 15.51 acres. For the Hill property, along the south side of Early Stage Coach Road, the City has a purchase agreement in the amount of $32,000 for fee acquisition of approximately 2.06 acres – plus the City is acquiring an avigation easement area of 1.02 acres for $4,000. The City received grants to cover the purchase of these properties. For the Francois property, the City received 100% of the funds through the FAA. The City obtained another FAA grant for the Hill property, which covers 90% of the cost.

But the company is at a stalemate with three of the property owners for the remaining five tracts that are needed for the airport expansion. Tracts 5 and 6 – approximately 10 and 33 acres respectively – sit to the north of the runway and are owned by Todd and Angela Summers (previously owned by William Gearhart). Tract 8 – approximately 8 acres – sits to the east of the runway and is owned by Kevin and Mary Offerman. And Tracts 10A and 10B – just under half an acre each – sit to the south and are owned by TNT Farms (Elizabeth Beswick-Todd). The City has offered the Offermans $134,000 for 8.62 acres (including 0.16 acres of existing right of way). The City has offered the Summers $460,000 for 39.41 acres, including their well and partial loss of their gravel driveway. And the City has offered TNT Farms two options – $3,000 to acquire the areas as permanent easements or $26,000 for the fee acquisition of the area needed for the project.

(Note the final numbers varied from the initial tracts due to negotiation with the property owners. The City says during negotiations with the property owners, there were areas that were modified to help with farming operations or identified areas that an easement would work instead of a fee title. Modifications require approval by the FAA before they are finalized.)

Some Manchester area residents are frustrated, wanting to know what happens if the City isn’t able to negotiate a price with these landowners. Is eminent domain really necessary? Will the entire project go back to the drawing board or is this how it has to be? In Vick’s opinion, it’s the latter.

The Manchester City Council gave their approval on a 4-1 vote during Monday night’s city council meeting to turn over the land negotiations to the City Attorney – and, if a purchase agreement is not reached with the landowner, to move ahead with eminent domain. Vick says the Council would prefer not to do it this way, but they understand the City’s overall goal.

Councilperson Linda Schmidt voted against it. Schmidt tells KMCH she agrees with the taxpayers that it’s a project they can’t afford and that it would be a burden to taxpayers.

The City of Manchester says the start of the expansion project is still about three years away – they’ll need to finalize the engineering and work with the FAA to begin construction. 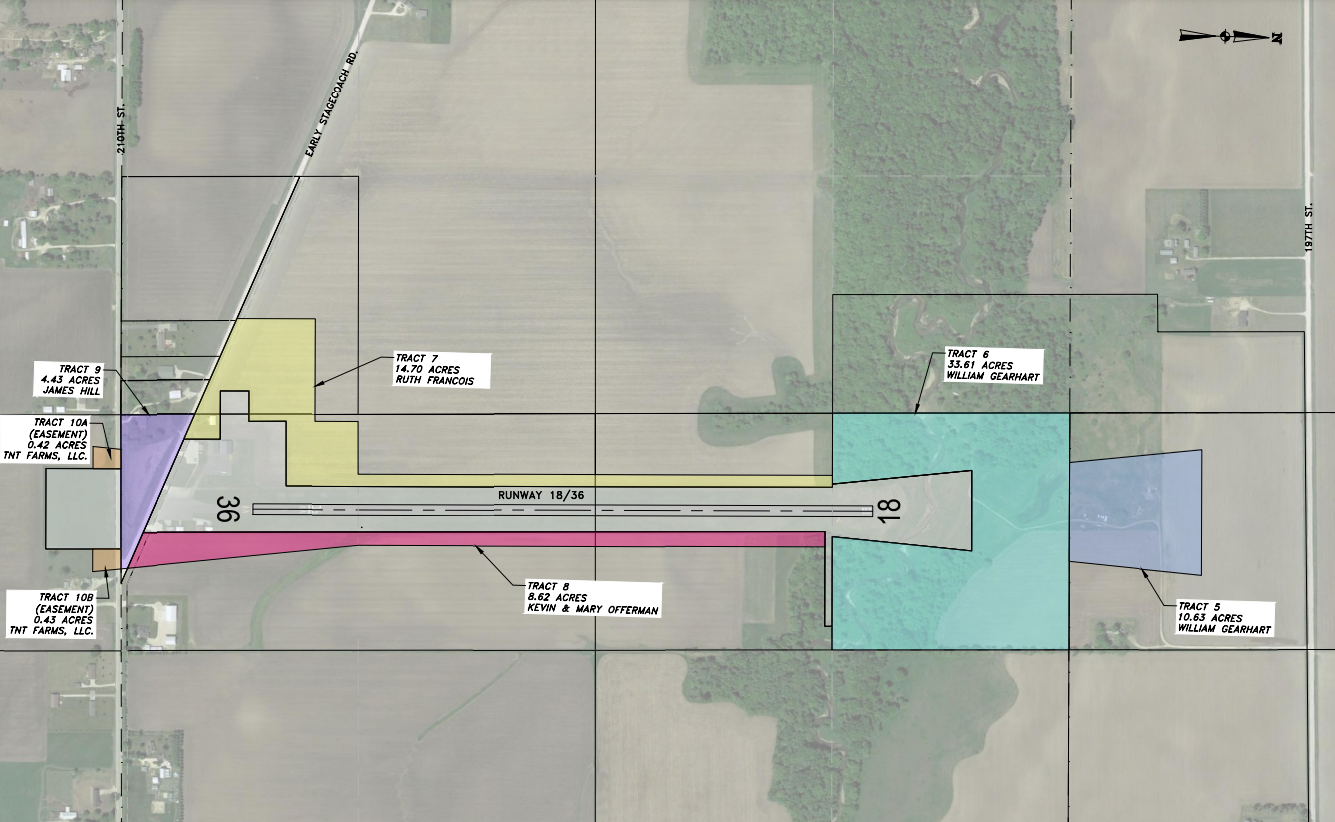 map courtesy of City of Manchester

A Pair of At Work Winners