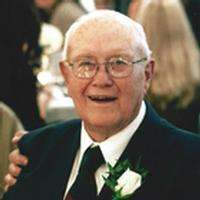 Friends and relatives of Ben may call from 2 to 8 p.m. Sunday, Jan. 21, at Reiff Funeral Home in Dyersville, Iowa, where a wake service will be held at 2 p.m. Friends also may call after 9 a.m. on Monday at the funeral home.

Services for Ben will be held at 10:30 a.m. Monday, Jan. 22, at St. Paul’s Catholic Church in Worthington, with the Rev. Dennis Conway presiding.

Burial will be held in St. Paul’s Cemetery in Worthington, with full military honors afforded by Cascade American Legion Post 528.

He was born Jan. 14, 1925, in Dyersville, Iowa, the son of Frank and Mary (Noethe) Loecke. He received his education in the St. Paul’s schools in Worthington. On May 30, 1949, he was united in marriage to Joan Wolfe. She preceded him in death on March 2, 2014. He was an electrician and owned the Loecke Feed store. He also farmed in the rural Worthington area. In retirement, he resided at River Bend Assisted Living in Cascade from July 2014 to March 2017. He resided at the Great River Klein Center in West Burlington from May 2017 until his passing.

He enjoyed fishing and hunting, especially deer hunting, for 62 years. He truly had a passion for his children, grandchildren and great-grandchildren.

He was preceded in death by his parents; one sister, Verna Mae Roling; and a brother, Ralph Loecke.

Ben enjoyed the staff and his friends at River Bend Assisted Living. The family is sincerely grateful for the loving care Ben received while living at Great River Klein Center.

Online condolences may be sent to the family at www.reifffuneralhomeinc.com.