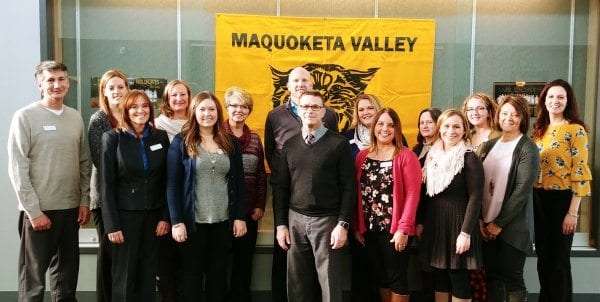 The Manchester Chamber Ambassadors got a chance to tour the recent changes at Maquoketa Valley High School in Delhi on Thursday.

The renovation and addition project wrapped up in October. And high school principal Troy Osterhaus says along with a new front entrance and landscaping, there have been quite a few changes.

And even though some of the work was done while school was in session, he’s says overall, the transition went pretty smoothly.

And the students are enjoying the renovations and additions. Maquoketa Valley senior Tyson Tucker recognizes that most small school districts like MV don’t always get the opportunity to make improvements like this.

And as a year-round athlete, you can probably guess which part of the building’s improvements Tucker enjoys the most…

And Osterhaus says more improvements are on the way…

And speaking of a new gym floor, the Maquoketa Valley Athletic Booster Club is wondering if any alumni would be interested in purchasing pieces of the old gym floor as part of a fundraiser for the club… a chance for former athletes and students to have a little part of their past as a keepsake. If you’re interested, check out the Booster Club’s Facebook page!