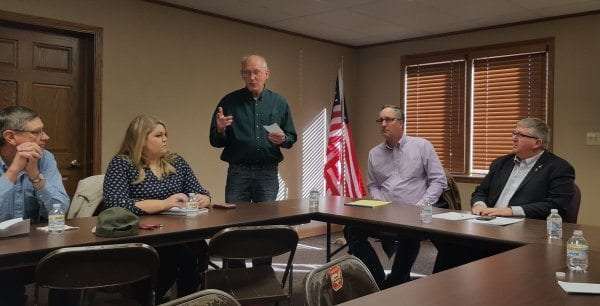 Some Delaware County residents got a chance to visit with a couple of area legislators on Friday morning.

Republican State Senator Dan Zumbach of Ryan and Republican State Representative Lee Hein of Monticello answered questions on a variety of topics, ranging from the Bottle Bill and education to tax reform and building moratoriums. Rural broadband service was also brought up – something Senator Zumbach would like to see accomplished.

A discussion on water quality kicked off the forum. Governor Kim Reynolds signed the new water quality bill – her first bill as Governor – into law last week, something Representative Hein says he has worked long and hard for.

Hein says the session is moving along quickly, with Funnel Week already next week.

Zumbach also noted how efficient the session has been so far this year.

If you missed Friday’s Legislative Coffee, you’ll have another chance to attend… the next one is coming up on March 2nd.