The emerald ash borer has been discovered in Delaware County.

The Iowa Department of Agriculture says an insect sample was collected from Edgewood, with officials confirming the sample positive for emerald ash borer.

The emerald ash borer is very small, shiny, green beetle – and it is an invasive pest from Asia. It bores into ash trees and feeds on tissues beneath the bark, ultimately killing the tree.

Infested ash trees may have thinning and dying crowns, water sprouts along the trunk and main branches, increased woodpecker activity that causes the tree to look like it’s losing patches of bark and S-shaped galleries on the inside of the bark. The trees may also have vertical bark splits and one-eighth inch D-shaped exit holes where adult beetles emerged from the trees.

Once infested, ash trees continue to decline and usually die within two to four years.

Trunk injections can be done now through the end of August if a landowner is interested in protecting a valuable and healthy ash tree within 15 miles of a known infestation.

The emerald ash borer has now been detected in sixty-four counties in Iowa – Jones County is the only local county where the insect has not yet been discovered. You can find a map of which counties have infestations below: 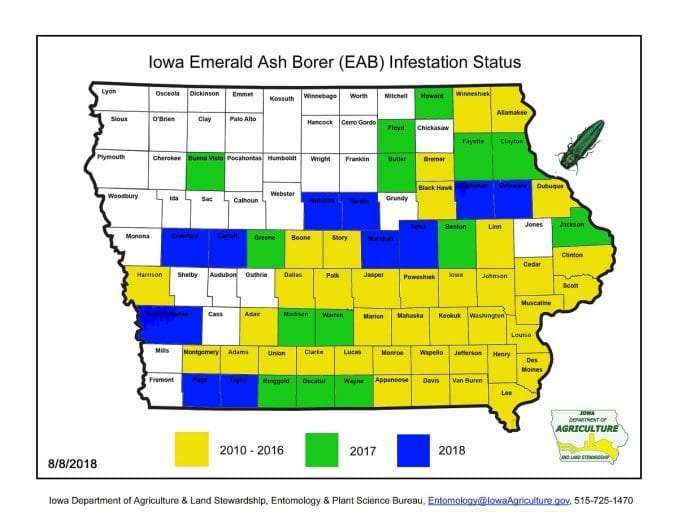