The Latest
(Clive, Iowa) Sept. 2 2020 – The work of Iowa’s pig farmers is the core of a vital pork industry in the state, says a new study released by the Iowa Pork Producers Association (IPPA).
Providing Jobs, Economic Activity
Iowa’s 5,418 pig farms generate work not only in pig production, but also in hog harvesting and pork processing. In all, there are 147,105 Iowa jobs created by the 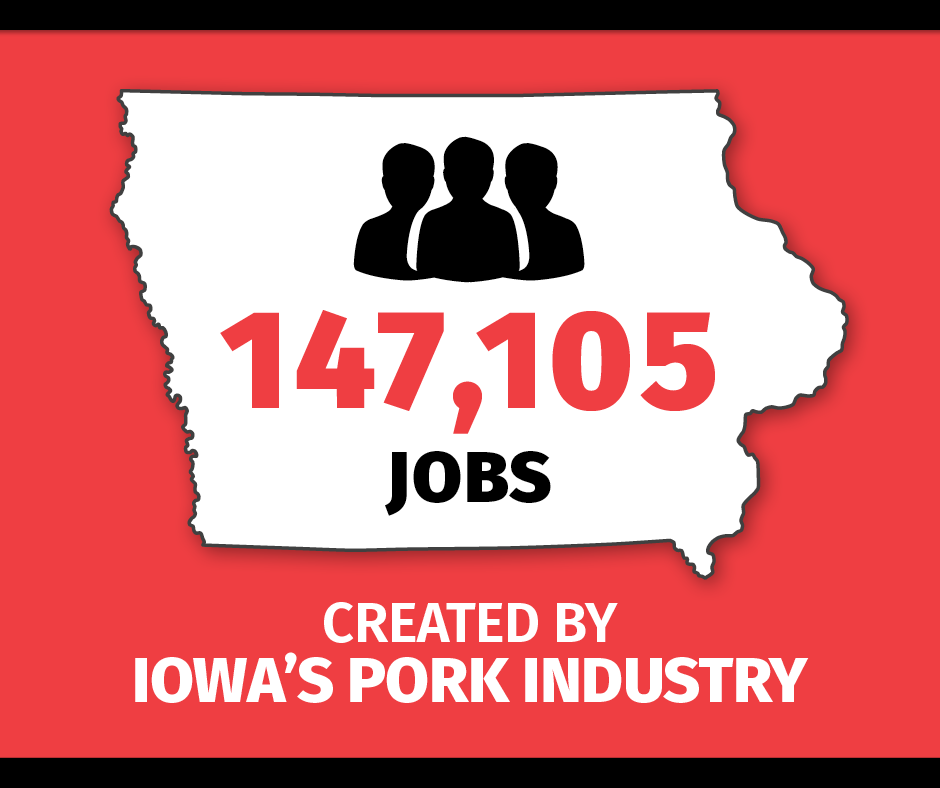 pork industry through direct, indirect and induced jobs. The jobs break out this way:
A study provided a year ago by the Coalition to Support Iowa Farmers showed that livestock production was the only agriculture sector that was increasing the number of jobs in Iowa.
In the three areas of the pork industry, labor income from those Iowa jobs is $6.84 billion, according to Decision Innovations Solutions (DIS), an economic research and analysis firm that conducted the study for IPPA. DIS used a 2018 Iowa dataset, data from the USDA 2017 Census of Agriculture and other USDA/NASS sources and used IMPLAN modeling to project data that would reflect 2019 numbers and dollars.
The three pork industry sectors generated $40.8 billion in sales. Pig production accounted for 34 percent of the total, or $13.9 billion in sales from Iowa’s pig farms. Hog harvesting facilities had 55 percent of the sales, and pork processing accounted for 11 percent of sales.
Using Local Feedstuffs
There are several reasons that Iowa is the nation’s number one producer of pork. The state’s pig farmers not only have a proud heritage, they have built upon the experiences of that heritage and combine it with using new research and technology to become more efficient in producing nutritious, safe and delicious pork. Another reason is the availability of key feedstuffs for raising pigs.
A balanced pig diet contains energy and amino acids, which come from corn and soybean meal diets. From weaning to reaching market weight, an average pig eats 12 bushels of corn and 2.5 bushels of soybeans. Over the course of a year, Iowa pigs consume corn that is the equivalent of 22 percent of the state’s corn production and 23 percent of the state’s soybeans. That means nearly one-fourth of Iowa’s row crops are marketed for near-by use, thus reducing the cost of grain transportation.
Pigs and Farms, Increasing and Decreasing
The number of pigs in Iowa in December 2019, was 24.8 million hogs. Ninety-five percent (23.79 million) of those hogs are market animals, which have increased by three percent annually for the past decade. Iowa holds 32 percent of the U.S. hog inventory.
Conversely, Iowa’s breeding herd (1.01 million head) has been declining slowly despite growth (1.2 percent) in the national breeding herd (6.46 million).
The size of pig farms is increasing, 69 percent of Iowa’s hog inventory is now on farms with 5,000 or more pigs (20 percent of all pig farms). However, the most common commercial-size hog farm (32 percent) in Iowa is in the category of 2,000-4,999 head. Farms with 1,000-1,999 pigs are 13 percent of Iowa’s pig farms.
The top five counties in pig inventory are Washington, Sioux, Lyon, Hamilton and Plymouth counties. Each of these counties has more than 1 million pigs.
In addition to analyzing state data on the impact of Iowa’s pork industry, additional analysis was conducted on 35 counties in Iowa to review local economic contributions. (The data from these counties will be released soon.)
Adding Barns is a Jobs Benefit to Counties
The DIS study also included information about the economic activity in a community when a new 2,400-head finishing barn is built. This part of the study considered the construction and first year operations of a barn this size, which is typical for Iowa. Building the barn would create 12 jobs (half in construction and half in operations) and sales activities of $2.5 million.
A new pig barn sources about 35 percent of inputs locally. The construction of a new pig barn requires several purchases such as steel, concrete and equipment. Once construction is completed, pig farms purchase feed, veterinary and other professional services, and many other inputs to produce market hogs for sale.