“Very hot temperatures and drier than normal conditions last week allowed farmers to make significant planting progress across much of Iowa,” said Secretary Naig. “As we look ahead, weather outlooks show promise in keeping planters rolling and farmers busy in the fields.”

The weekly report is also available on the USDA’s website at nass.usda.gov.

Anomalously hot conditions blanketed much of the central United States as a strong blocking ridge within the atmospheric flow pushed Iowa temperatures up to 16 degrees above normal; the statewide average temperature was 72.5 degrees, 13.0 degrees above normal. Strong weather disturbances riding along the ridge produced multiple rounds of strong thunderstorms with a rare large-scale dust storm ahead of a derecho impacting northwest Iowa, eastern South Dakota and southern Minnesota. Below average rainfall was measured statewide with departures of almost an inch below normal over southeastern Iowa.

Showers and a few thunderstorms continued to move across central and eastern Iowa through Sunday (8th) afternoon with temperatures ranging from the mid 50s north to upper 60s south. A pocket of heavy rain from sluggish storms was reported across Story, Hardin and Grundy counties with over 20 stations in the vicinity observing at least an inch. Southeasterly winds increased overnight into Monday (9th) as partly to mostly sunny skies reigned with a strong thermal ridge setting up across the Midwest; combined with southerly winds, temperatures over the next several days would be well above average with many stations breaking daily record highs. Afternoon highs hit the low to mid 90s in southwestern Iowa with low to mid 80s northeast. A cold front moving through the Upper Midwest forced strong to severe thunderstorms in northeast Iowa as cold air clashed with warm and humid conditions close to midnight. Thunderstorms dissipated a few hours later with winds shifting to the north and temperatures dropping into the 50s behind the front. Rain totals reported at 7:00 am on Tuesday (10th) were isolated to the northeast corner with a narrow band stretching southwest. About half of the stations reporting rainfall had amounts above 0.40 inch with Greenfield (Adair County) measuring 1.20 inches. A warm front draped west to east across Iowa split afternoon temperatures by nearly 20 degrees statewide with upper 70s north to low 90s over the south. Overnight lows remained in the mid 60s to mid 70s as patchy fog and haze were visible at sunrise on Wednesday (11th). Skies remained mostly clear through the day as temperatures reached into the 90s. A strong low pressure fired several severe thunderstorms in northwestern Iowa during the late evening with rain above 0.20 inch reported at a handful of stations; Sibley (Osceola County) observed 1.48 inches.

Thursday (12th) was a remarkable weather day in the Midwest with a late afternoon severe-warned squall line racing northeast through Nebraska and South Dakota, clipping Iowa’s northwest corner. The thunderstorm line was classified as a derecho, the third to impact Iowa since 2020. Rain-evaporated cold air outflow in front of the derecho lofted dry topsoil, producing a rare dust storm known as a “haboob.” Hot temperatures fed the instability with a statewide average high hitting 93 degrees, 23 degrees above normal. A secondary thunderstorm line formed along a cold front and left measurable rain across much of western Iowa. Most stations reporting rainfall had totals under 0.25 inch; a few measured over 0.50 inch with 0.62 inch reported at Little Sioux (Harrison County). Friday (13th) was pleasant with near-seasonal temperatures in the 70s and sunshine. Winds remained variable overnight into Saturday (14th) with morning lows dropping into the mid to upper 50s as a cold front moved into western Iowa. Afternoon highs in front of the boundary pushed into the upper 80s while behind the front, 70s were observed. With the clash of airmasses, a few isolated severe-warned thunderstorms fired in the afternoon in central Iowa and then later in the night. Moderate rainfall occurred in west-central and southern Iowa with totals reported on Sunday (15th) morning in the 0.25 to 0.50 inch range.

Weekly precipitation totals ranged from no accumulation at several southeastern stations to 2.55 inches at Zearing (Story County). The statewide weekly average precipitation was 0.42 inch while the normal is 0.95 inch. Little Sioux reported the week’s high temperature of 100 degrees on the 12th, 29 degrees above normal. New Hampton (Chickasaw County) and Oskaloosa (Mahaska County) reported the week’s low temperature of 41 degrees on the 9th, on average five degrees below normal. Four-inch soil temperatures were in the mid to upper 60s statewide as of Sunday. 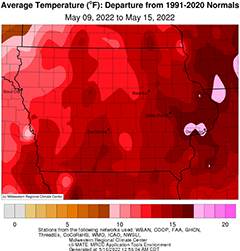