The Holiday Train is chugging back into eastern Iowa.

It’s a thousand-foot long, fourteen-car freight train that’s colorfully lit for the Christmas season from engine to caboose with over 80-thousand lights.

Railroad spokesman Andy Cummings says the train is on a mission to raise money for local food banks, with holiday music concerts at each stop.

The Holiday Train made stops this past week in Davenport, Muscatine and Ottumwa, with more stops today in Clinton, Bellevue and Dubuque. And on Wednesday, the train will continue making its way north to Guttenberg, Marquette, Lansing and New Albin. And Cummings says each stop is a little different.

Cummings says the Holiday Train is sort of a rolling fundraiser for food banks in each town where it stops.

Since 1999, the Holiday Train has raised more than 21-million dollars and five-million pounds of food for community food banks across the U.S. and Canada. Cummings says all donations stay local to help feed those in need in the community. 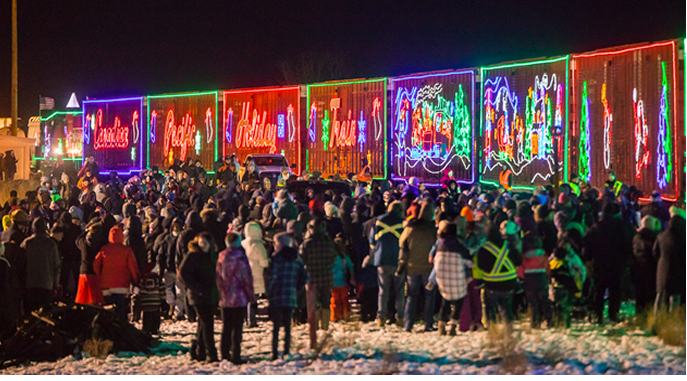