These members were selected from 35 candidates vying for the honor. Candidates take part in an interview process with the District FFA Officer Nominating Committee leading up to the selection. The Northeast District FFA comprises 40 chapters.

Ryan Wolf, of Epworth , a member of the West Dubuque was elected district president. Wolf is a current senior at Western Dubuque.

Annabelle Newton, of Vinton, a member of the Vinton Shellsburg FFA and a current junior in high school was elected as District Reporter.

Tessa Tauke, of Earlville, a member of the Beckman Catholic FFA at Dyersville, was elected Northeast Subdistrict vice president. She is a junior in High School.

Ryan Franzen, of Fort Atkinson, a member of the Turkey Valley FFA at Jackson Junction, was elected Northwest Subdistrict vice president. He is a junior in HighSchool.

Josie Boyle, of Peosta, a member of the West Dubuque FFA, was elected Southeast Subdistrict vice president. She is a junior at Western Dubuque High School.

Josh Wiley, of Walker, a member of the Vinton Shullsburg FFA, was elected Southwest Subdistrict vice president. He is a junior at Vinton Shellsburg.

Each year, six students are elected by delegates at the District FFA convention held March 12, 2022 in Decorah to represent the organization as District officers with a District President being elected at the State Convention which was held April 10-12, 2022 in Ames.

Throughout their year of service to the Northeast District FFA Organization, the officers will interact with business and industry leaders; thousands of FFA members and teachers; corporate sponsors; government and education officials; state FFA leaders; the general public; and more. The team will lead personal growth and leadership training conferences for FFA members throughout the district and help set
policies that will guide the future of FFA and the next generation of leaders. 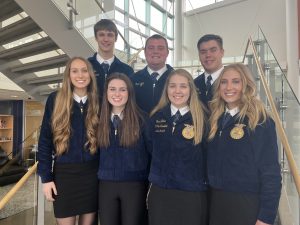