Minnesota is underway to the driest start of June on record dating back the last 130 years, Clark says: “They are certainly going to be welcoming this rainfall.”

However, the system this weekend will not bring widespread rainfall.

“The forecast going forward for the next 10 days shows everybody is below normal in the rainfall department,” Michael Clark from BamWx says. “I think there could be some significant heat and dryness set up here in the heart of July.”

Clark says the current hot-and-dry pattern is being driven by:

The heart of the U.S. will be the bullseye for this heat and dryness, which could create a flash drought.

“Unfortunately, because of how quickly we’ve gone dry and how warm we are going to continue to be and the lack of rain in the forecast, it’s a classic flash drought scenario,” he says. “I do believe that is problematic going into July.”

Typically, a hurricane or tropical storm is needed to abate a flash drought. But, Clark says, those tend to not arrive until mid to late August.

“That’s typically where relief would come from,” he says. “In the 30-to-45-day period, I’m not very optimistic on that at this point in time.” 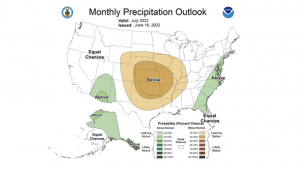